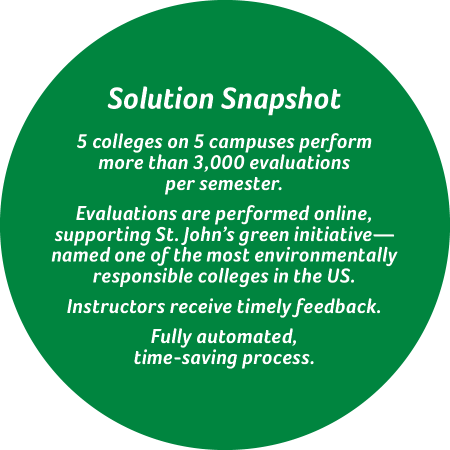 They had to package forms for each campus, college, and class, deliver the packets, then collect the completed forms. After shipping the forms to Scantron for scanning and processing then receiving the data and initial reports or scanning forms themselves, they had to sort and parse the results further into reports for each instructor.

“In some cases, we were delivering reports as much as six months after a course was completed,” says Amy Filadelfo, Assistant Director of the Office of Institutional Research. “That’s just too late to do anything. Two of the biggest stakeholders in the process, students and faculty, weren’t seeing any results—and how do you get them invested in the process at that point?”

While St. John’s was pleased with the ease of use and reliability of Scantron forms, the collection process and reporting was unsustainable. Faculty were frustrated, and students felt like they weren’t being heard. They needed a solution that was more centralized and efficient.

“We needed to lower costs,” states Filadelfo. “Beyond that, the university was going green, and we wanted to do our part to reduce the use of paper supplies. Plus, the workload of paper was just too much for one person. We were already happy with Scantron, so they were an obvious choice.”

St. John’s implemented Class Climate in 2007, and they have been collecting student feedback data online ever since.

“We’ve been able to create a ‘culture of assessment’ by using Class Climate,” says Filadelfo. “The process is so smooth and fast that both students and faculty know we are committed to not only collecting but also using course feedback.”

Class Climate’s online approach has streamlined St. John’s evaluation process. Beyond delivering online evaluations, the entire flow is online, ensuring a centralized and controlled methodology that increases consistency. “By allowing us to centralize the process, we could have one person responsible for everything from start to finish and know what’s going on. It’s much more efficient,” states Filadelfo.

Class Climate has provided St. John’s with better tracking in real time. Faculty can see response rates and know whether they need to send reminders or mention the evaluations in class. This real-time data keeps faculty involved and invested in the evaluation process.

Students know the university takes feedback seriously, and St. John’s has seen an ongoing increase in both the quantity and quality of student feedback.

“During any given semester, we’re evaluating more than 3,000 courses across five distinct campuses. Without the simple automation process built into Class Climate, there is no way that I would be able to perform my job.”

Further, the automated process makes it easier to track progress and resolve faculty issues more credibly. “If an instructor complains that their students have not received evaluation invitations, I can look at the system and immediately answer with when the invitations went out,” says Filadelfo.

Because every instructor gets the same report format customized with their results, it’s easy to compare data within and across departments. This helps university administration use feedback data equitably for tenure and appointment reviews.