To get a sense of the stakes involved, see the article about JudgingCard in Sports Illustrated!

Agricultural competitions provide a unique opportunity to develop the future farmers, food inspectors, and agricultural experts that produce and examine what we eat in the United States. Supporting these students’ efforts to learn more and improve their skills ensures that our food supply is sustainable, healthy, and safe.

Competitors are evaluated and ranked on their knowledge and ability, and awarded as individuals and as teams. Often, scholarship money and other funding hangs in the balance, so it’s crucial that results are accurate and available rapidly.

“It took enormous teamwork and effort to score competition judging,” says Russell Ewell, Project Manager for JudgingCard. “Judges had to manually calculate scores using very complicated equations. These are fierce competitions, and the scoring has to be accurate. We knew there had to be another way.”

JudgingCard was founded by Clay Ewell in an effort to help his father, a long-term professor of agricultural courses, score and manage agricultural competitions at Tarleton State College in Texas. He turned his engineering skills toward creating a solution that would make delivering accurate results faster and easier.

“Competitions have a short time frame to deliver judging results and are under enormous pressure to calculate scores accurately. With Scantron scanners and our online solution, competitions can easily score up to 8,000 judging cards featuring very complex calculations in as little as two hours.”

Ewell saw that the college already owned several Scantron scanners, and reasoned that those could be used to score competitions, as well as tests.

“Even as a high school student, Clay already had a knack for engineering and automation,” says Clay’s brother, Russell. “He was fifteen years old when he first started using Scantron’s scanners and ScanTools Plus to start developing what became JudgingCard.” 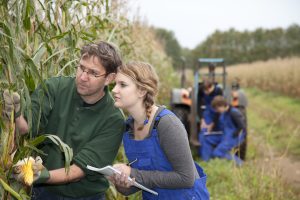 Clay’s labor of love remained a constant in his life through college and beyond. He continued expanding and improving scoring algorithms, eventually developing an entirely custom online system that uses Scantron scanners and forms to send judging data to an online system. This online system uses the data to calculate scores and provide results and feedback to CDE participants.

“Accuracy is so important,” says Ewell. “These competitors are our future farmers, food inspectors, and processing plant leaders. Agricultural CDEs take place in barns, fields, and ditches—we have to scan dirty, muddy judging sheets and get the results right every time, using some pretty complex scoring criteria. Scantron scanners and forms give us accurate data, and JudgingCard does the rest.”

“Scantron scanners are sturdy and reliable—even out in a field, powered by a generator.”

JudgingCard works with each competition to design scannable forms that match their judging criteria, produced through Scantron’s print facility in Columbia, Pennsylvania. They sell the competitions the appropriate scanner(s), customize the scoring as necessary, and provide assistance at the event.