Wallace Community College Selma’s (WCCS) school of nursing was facing potential probation from the state board of nursing if it was unable to increase student board scores. The faculty and WCCS’s president offered full support to find a solution that would help students and teachers make immediate improvements. 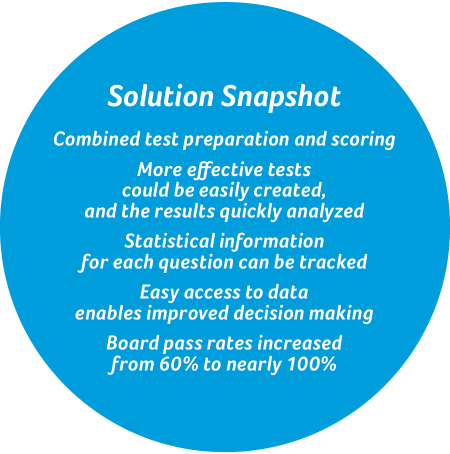 WCCS was facing a critical situation familiar to many nursing programs. WCCS’s school of nursing student state board exam pass rates were down to near 60 percent. If the school did not do something to increase scores, then the program risked probation.

Upon evaluation of the nursing program, improved test preparation was determined as one of the key success factors that would help improve board scores. Therefore, the school made test improvement one of the main objectives in its strategic plan.

“Before adopting Scantron’s solution, we were using tests with questions that were written by instructors and taken by students manually,” said Becky Casey, Director of Wallace Community College Selma’s school of nursing. “The problem was not with the teachers or the students, it was with the tests. We had no way to determine reliability or validity of test questions. Therefore, we were not able to determine which questions were good and which were not.”

Scantron provided a solution that combined test preparation and scoring software, Optical Mark Read (OMR) scanners and paper-based test forms. Scantron’s ParSystem, including ParTest and ParScore, was determined to be the best fit for solving the College’s test preparation issues because it offers tools to easily create quality tests and quickly analyze the results.

“We needed a solution that would help us increase board pass rates, fast,” Casey said. “We heard about ParSystem and we decided to give it a try. In one year our board pass rates jumped from 65 percent to 96 percent, and the next year the scores jumped to an amazing 100 percent pass rate. Even the national average was near 86 percent. To me, ParSystem’s effectiveness is proven through the numbers.”

“ParScore allows us to make better test questions,” said Casey. “Now, we can create tests with questions that challenge the students. If too many students miss a question, we know that the question was either poorly written, too difficult, or the material was not covered in class. Having easy access to the data allows us more time to determine what factors are affecting the students and then make improvements.”

“In one year our board pass rates jumped from 65 to 96 percent. To me, ParSystem’s effectiveness is proven through the numbers.”

By implementing Scantron’s ParSystem, WCCS was able to increase board pass rates from near 60 percent to 100 percent. “I attribute our increased board pass rate to ParSystem,” Casey said. “ParSystem allowed us to take the content that we were teaching and make better tests, which helped the students answer the questions correctly and retain the knowledge required to pass the board exam. Scantron made it easy. We ordered an OMR scanner for the department and the instructors use Scantron’s forms to gather and score test data. We like that the test scoring is fast and the ParScore software offers advanced analysis on a question by question level, so that we can refine tests over time.”

The goal of WCCS’s nursing program is to teach students the principles and practices that they will need to apply in clinical situations on the job. However, the only means of entry into nursing employment is by passing the state board registered nurse license exam.

“We want our students to be prepared for their careers in healthcare, but we also understand that the first step is passing the state board exam,” Casey said. “Scantron’s solution not only helped increase our board pass rates, but it saves our instructors time by eliminating manual test preparation. It also helps the instructors assess each student’s individual strengths and weaknesses. I would recommend ParSystem and Scantron to other schools of nursing that want help preparing nursing students for state board exams.”

At the fall meeting of ABNS (American Board of Nursing Specialties), Castle Worldwide (now…