A major US refinery with several locations relies on rapid reporting of safety observations using Scantron’s SafetyCapture. Since implementing the solution, the company has enjoyed a safer environment, smooth turnarounds and improved morale.

Since implementing Scantron SafetyCapture in 2010, this refinery location has grown from approximately 500 permanent personnel to 4,000. At the same time, the safety team has experienced dramatically improved speed and depth of reporting on safety observations. This rapid reporting has been critical during turnarounds. The site receives numerous awards for its performance and has since had a year with zero reportable injuries. 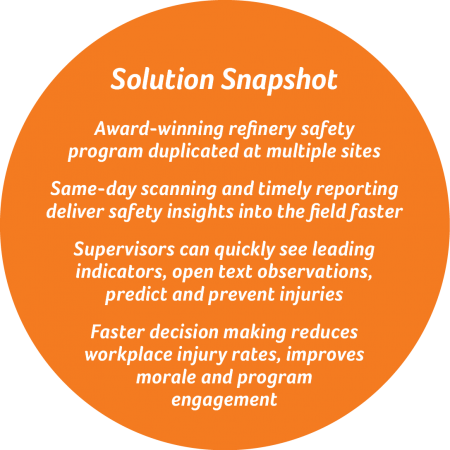 The safety team, led by safety engineer Ronald DuBois, was responsible for compiling and manually keying in results from as many as 1,000 safety observation forms every week. This labor-intensive process delivered results very slowly. He would build reports manually in spreadsheets.

“We need to find out what’s going on and let people know as quickly as possible,” DuBois says. “It used to take a month for us to recognize a trend. This was unacceptable. There might be an injury that we could have prevented.”

The problem was exacerbated by periodic turnarounds, planned major maintenance phases that infuse a large number of outside personnel — typically contractors who may or may not be familiar with a site’s safety protocols. “Once a year, an extra 1,500 to 2,000 contractors come into the refinery. Most have never been here. We have to watch them a lot more than regular employees. We can’t allow a month, or even a week to pass, to let four or five people get injured and have them out on lost time injuries.”

In 2010, the refinery implemented SafetyCapture, which enabled rapid scanning of standard forms — printed to the refinery’s specifications — and fast detection of trends. The safety team observes the trends, which may include basic behaviors or potential risks, and then delivers corrective measures.

DuBois says, “With SafetyCapture, all I do is scan the forms and they’re in a spreadsheet. I instantly know what the trends are. They may be issues with gloves, tying off, or other personal protection equipment. Now we can tell what’s going on and address it the next day. Because we can get so much data and foresee risks, we can say, ‘Something is about to happen here; an injury is likely.’”

What does this mean for turnarounds? “Last year during a turnaround, I decided to add some of the contracting company names to the observation cards. Since they were new, I wanted to be able to quickly identify them to let them know if something was going wrong.
Sure enough, some contractors didn’t know some procedures and safety rules. Since I could quickly ascertain what they were doing, I went to their supervisor and advised them to coach their people. They weren’t even a week into the turnaround and the issues were already corrected. If that had continued without me knowing, there would have been an injury.“

“They weren’t even a week into the turnaround and the issues were already corrected. If that had continued without me knowing, there would have been an injury.”

DuBois’ team also relies on open comments – yet another benefit of using SafetyCapture automation. “We promote using open comment fields because we get information that just bubbling in marks cannot address. Some people thought rapid data capture via forms would restrict us. But now, it’s easier than ever. You may have a whole lot of comments, but you can see them all at once, nice and neatly lined up on a screen.”
Was training the team difficult? “Not at all. The concept is simple. Observe something, write down what you see, and if you are putting in comments, be sure to darken that bubble on the form, and drop it in the box without bending it.” DuBois also emphasizes that mobile applications don’t suit their use case. “Any method for observation capture has to be intrinsically safe. You can’t use phones at a refinery.”

The refinery has been using SafetyCapture for eleven years while growing from in personnel. According to DuBois, “One injury costs you a fortune. I’m eliminating the risks for a lot of injuries. This has saved lives — I’m not exaggerating.” Other sites have now adopted SafetyCapture as well, with similar success.

In 2012, DuBois’ site had zero recordable injuries, a first for the entire company, and has won the president’s award three times.

“One injury costs you a fortune. I’m eliminating the risks for a lot of injuries. This has saved lives — I’m not exaggerating.”

Has the refinery considered alternatives? No, says DuBois, and they’re not interested. “Without SafetyCapture, I don’t know what we would do. We have a dedicated safety committee of 50 people observing, plus contractors and personnel. Nightly, they’re delivering 200 forms plus another two or three hundred every day. We would be buried in backlog.”

The SafetyCapture solution has not only reduced injuries and risks, it has also improved employee engagement and overall morale. DuBois explains, “If they can work without injury, they can do more and they feel better about their job. They trust the safety program and are more willing to do observations. It has changed my life here.”