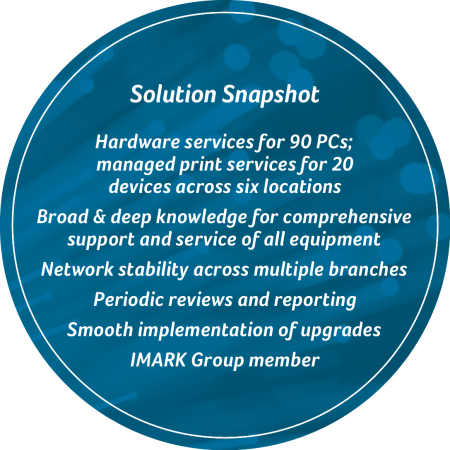 For a Louisiana-based electrical wholesaler with multiple branches, STS’s managed IT services and customer service have replaced the need for an IT division.

Nu-Lite, illuminating New Orleans since the mid-1950s, supplied the original lighting fixtures for the city’s Harvey Tunnel, and has since lit many other major ventures, including the Louisiana Superdome, Louisiana’s WWII Museum, University Hospital and the practice facilities for the Saints and the Pelicans. With five branches in the New Orleans metro area and a home office in Harahan, La., Nu-Lite has also played a key role in rebuilding New Orleans in the aftermath of Hurricane Katrina.

Nu-Lite has about 80 employees that use a wide variety of technology. For many years, Scantron had already been managing Nu-Lite’s servers. Their needs had outgrown the capacity of one internal IT specialist to maintain and support.

The breadth and depth of one individual’s knowledge and certifications could not cover the array of technology solutions needed, including: business software issues, support for various types of printers, implementation and support of VPNs, and delivery of regular patches and upgrades.

When their IT administrator left the company, Nu‑Lite chose to entrust its managed IT services and print management to STS. According to Michael Mertz, administrator and operations manager at Nu-Lite, expanding the relationship to include endpoint hardware and printers was a natural next step. “Scantron is always kind of behind-the-scenes, managing our servers, pushing updates when we need them and paying attention to different things. I think the most important piece is that when we call and say we’ve got a problem, it’s usually fixed within a day, or the next day. If you need a part, you’ll fly it in, and still have things back up and running phenomenally quick.”

This quick turnaround is not only crucial to the company’s internal operations, but to their customers as well. “With all five of our branches using a VPN, if something happens and that VPN goes down, then those branches are down. They don’t have access to our business software, so they can’t see pricing or orders. And if the router goes down, they can’t even get on the internet,” explains Mertz. “Our entire business is set up on that.”

“I think the most important piece is that when we call and say we’ve got a problem, it’s usually fixed within a day or the next day. They have a complete and total knowledge of what’s going on here. The amount of knowledge in that call center is pretty extreme.”

Mertz estimates that STS supports 90-100 computers—as well as twenty printers through our Managed Print Services program—across its six locations. He appreciates that there’s always someone available to handle whatever type of issue arises, but also that the technicians know him and Nu-Lite’s specific needs.

“I would say they have a complete and total knowledge of what’s going on here. There are different guys specializing in different things. If the person you’re on the phone with can’t help you, they’ll get you someone who can,” Mertz says. “I talk to the same seven or eight guys on a rotating basis and they’re always showing me things I haven’t seen before. The amount of knowledge in that call center is pretty extreme.”

Mertz himself has an extensive background in computers and multiple certifications. He has found that the annual reviews with Scantron that are built in to Nu-Lite’s service package help him keep track of how each machine is operating, and when it’s time to upgrade specific systems and machines.

“It’s a 120-140 page document of all kinds of useful and helpful information,” he says. “We go over everything that Scantron manages: servers, space, Unitrends for cloud backup. We even go so deep as to go over usage on individual machines and things that they see in terms of software on the machines that might need to be upgraded.”

“It’s very easy to see, from the information Scantron gives us, when something needs to be done. When it’s plain as day like that, I’ll go in front of the principals with a quote and, most of the time, I will get their blessing to move forward with it.”

If you’re a specialty technology vendor or a value-added reseller, you can meet customer expectations while growing. Our customized service offerings act as a nationwide extension of your support team. You can deliver consistent, prompt, onsite service without making large, risky capital investments or ballooning your payroll.