A community credit union needed a way to measure its engagement with its membership. After initially supporting their survey program, Scantron delivered a long-term solution, the AllianceLink Financial survey series. The program has enabled the institution to make better decisions and extend its competitive advantage, while supporting remarkable sustained growth and change over several years. 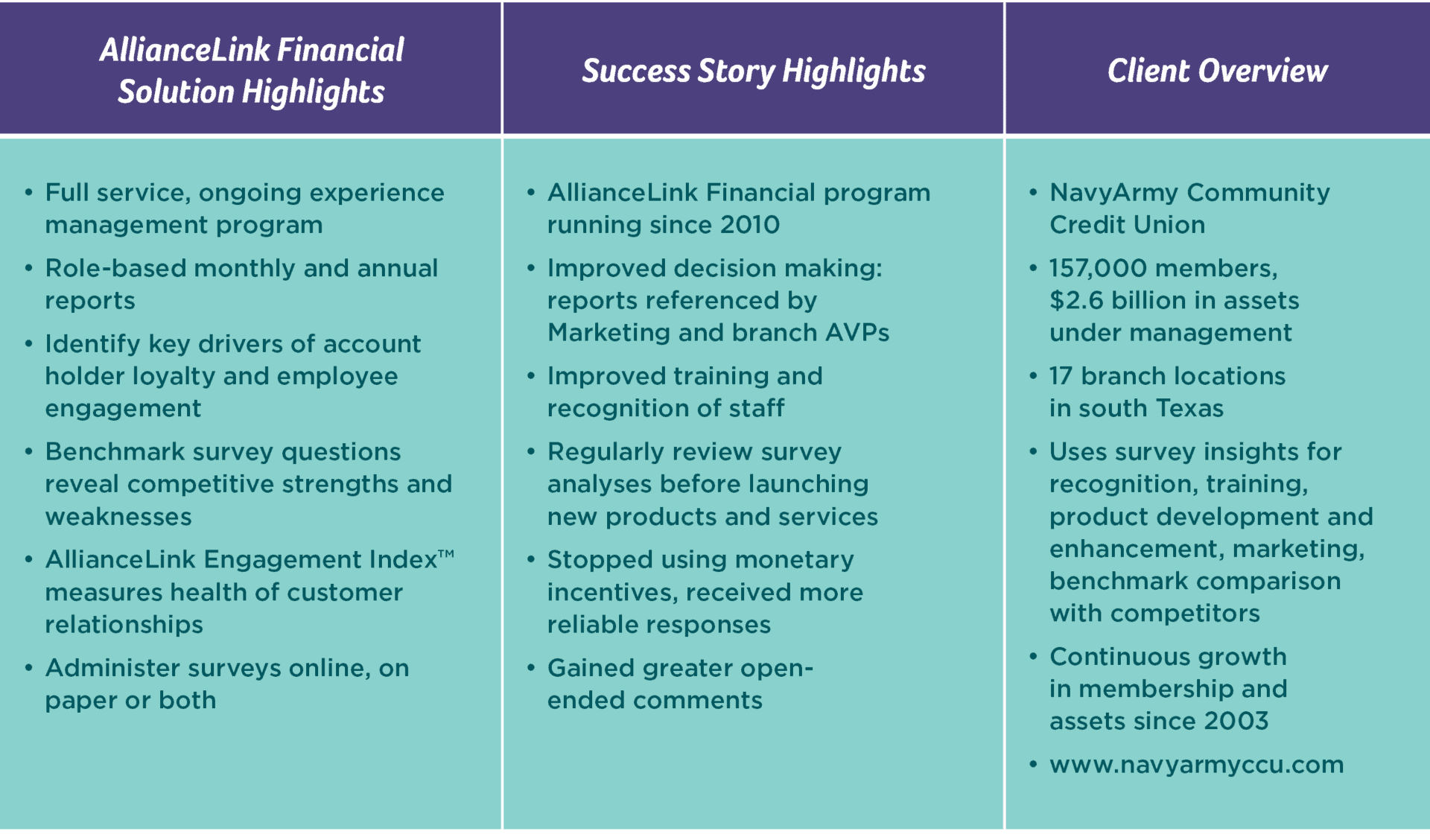 NavyArmy has always put a high value on its relationship with its members. Prior to engaging Scantron, the credit union used paper-based surveys to measure member satisfaction and the quality of their experiences with NavyArmy personnel. They used the responses primarily for internal recognition and for training public-facing roles such as tellers.

When Ashley Smith, Chief Marketing Officer first joined the credit union in 1999, paper surveys were the order of the day. She would manually write teller numbers on surveys, then send them out with a $5 cash incentive for completed responses. NavyArmy requested feedback on teller transactions, new accounts and new loans, among others.

As Smith recalls, “It was an awful, manual process. The Accounting team hated me. I was routinely telling them to add $5 to 400 accounts.”

NavyArmy was founded with an occupational charter, but in 2003, the charter switched to community-based. “My job got way more interesting,” says Smith. “By opening to the community, you need to find out what people want. We’re not just opening checking accounts and offering loans to people who love us, now we’re going out to people who don’t know us. I needed feedback.”

“I have all the confidence in the world in the people who develop the surveys. I’ve been approached by a million other survey companies. But I’m always pleased with Scantron.”

“When we brought in Scantron, I said, “This is how big boys do it. We need this information from our members to know what they want.” I needed survey experts so we could deliver better information to our decision makers and compare our gut feelings with facts. I could say, “We may think this is a good idea, but it looks like there’s room for improvement.”

Smith first invited Scantron to support the manual mail survey process with forms. Scantron’s team advised removal of the $5 incentive, collected responses and provided an email summary. “I was skeptical and said, “You won’t get enough responses.” But removing the skew from the cash incentive actually gave me more objective data and we got favorable responses.” 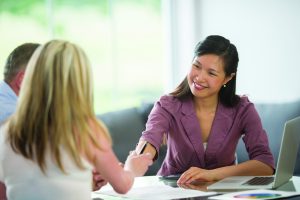 Once email-based surveys became the standard, a previously obscured flaw became apparent; responses could not be reliably attributed to specific interactions. “With new account surveys, we noticed that between the time the member opened the account and the time they opened the survey to respond, they might have come in three times.” Scantron and Smith solved the issue with basic item edits. “We modified the survey so we could get to the actual info in the member’s mind, even if the teller number was wrong. We asked, ‘Looks like you opened an account. Was it a real estate loan, a car loan, or just some other new account?’”

This led to more reliable responses. However, there was still a thirst for quality improvement and growth. NavyArmy membership and its assets under management grew despite the recession.

“It has been a good partnership because wherever there are gaps, Scantron notices and alerts us. I can trust that someone is looking at my data to ensure that there’s a check and balance.”

Smith decided to expand the Scantron relationship with the AllianceLink Financial survey series. The AllianceLink program customizes, delivers and reports on a series of standardized surveys, with fixed benchmarking questions built in to specific surveys. This enables NavyArmy to compare its member experiences to those of other credit unions, as well as to customer experiences with banks.

NavyArmy relies on four key member experience surveys that are delivered routinely throughout the year:

NavyArmy was able to take action immediately against responses, starting with recognition and training. As Smith illustrates, “We note big fluctuations on our reports, which are really useful for training and recognition. In surveys, I have a balanced data set, and if there’s a strong variance I can have a private conversation with a staff member.

“Our branch AVPs (assistant vice presidents) pull the comments and share with their branches. They can call out individuals and use the responses for staff incentives, recognition and training opportunities.”

“When we brought in Scantron, I said, ‘This is how big boys do it. We need this information from our members to know what they want.’”

NavyArmy uses the benchmark data to compare its own performance to other institutions. The AllianceLink program includes an annual report which includes an all-encompassing metric, the AllianceLink Engagement Index™. “I use this information every year to gauge where we are. We have used it in marketing messages.” 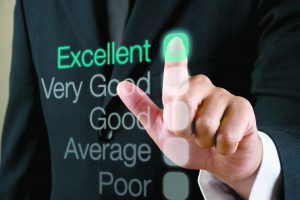 The program produces actionable insights that people in different roles can access. “The AVPs have their own role-based logins. I pull the standard reports, while they go in to check reports that correspond to their needs, all in real time. I use it for product improvement: for example, our eBanking survey.”

“We recently had a huge conversion of all of our RE loans. I can use the program to get a gauge on how well it went. The Teller Transaction survey has an open ended question about waiting time in the lobby, so we can effect process improvement as well.”

Smith says that one of the greatest things about the relationship with Scantron is having a person constantly looking at the survey engine and responses. They ensure that responses are valid, that the sampling for a given survey makes sense, and garbage data is not simply being received and processed into reports.

“It has been a good partnership because wherever there are gaps, Scantron notices and alerts us. I can trust that someone is looking at my data to ensure that there’s a check and balance; I’m sending you info, you’re getting it, someone’s looking out for my member data and making sure it’s in order for execution, and in sufficient quantity, or saying, “That looks peculiar.” Validating the files, rather than just saying, “There’s the data, pull the trigger on the report.”

Smith looks forward to many more years of leveraging the AllianceLink Financial program and Scantron Survey Services. “I have all the confidence in the world in the people who develop the surveys. I’ve been approached by a million other survey companies. But I’m always pleased with Scantron.”

The affianceSUITE FI service package supplements the extensive IT support of affianceSUITE with recommended services specifically for financial institutions.