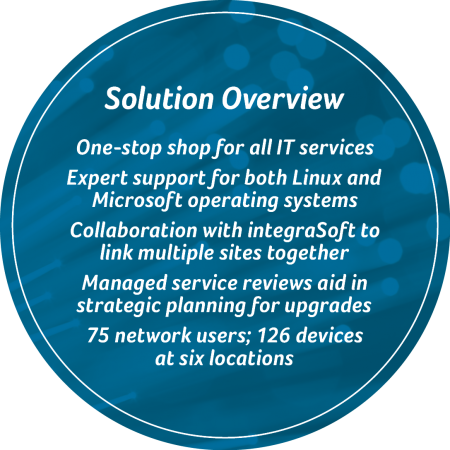 Since 1989, Scantron Technology Solutions has partnered with EMSCO, a supplier of commercial swimming pool equipment and support services for aquatic facilities, on a growing list of IT solutions. Because integraSoft, their core business application, requires the Linux operating system, EMSCO counts on Scantron’s Linux expertise to ensure that all of their needs are met.

Founded in 1974, EMSCO is a wholesale provider of commercial pool equipment and supplies for hotel pools and spas, as well as many of the Midwest’s largest indoor & outdoor water parks, major universities, city parks and recreational facilities. Headquartered in Strongsville, Ohio, EMSCO has additional offices in Columbus, Ohio, as well as in Pennsylvania, Kentucky and Michigan.

An IT Environment Evolving with Scantron

Scantron began providing onsite maintenance for EMSCO’s equipment in 1989. As technology evolved, the range of services expanded and Scantron developed an industry-leading expertise in Linux software. During the same period, EMSCO grew its relationship with Scantron to include comprehensive management of their network infrastructure—a protection suite which includes endpoint security, enhanced anti-malware and web security services—and network deployment projects.

“You guys have always handled our equipment. But about four years ago, our field service tech – the guy is fantastic – told us you had expanded your IT department to include full-service solutions,” says EMSCO Controller Rick Foltz.

Not only is Scantron a Microsoft Gold Certified Partner, but we also support a wide array of other leading platforms. “Before Scantron, we had a guy who just knew Microsoft. You guys are strong with Microsoft, but you also understand Red Hat and Linux. Backups of that are the key to our organization. If we lose our Excel or email, it’s a hassle, but we’re not out of business. If we lose Linux, we’re DOA.”

Scantron Technology Solutions has a long-standing business partnership with integraSoft, EMSCO’s software provider. Scantron worked with intregraSoft to link the company’s sites together to ensure efficient management and security of their Linux-based software. Our breadth of expertise in Linux, Microsoft and other operating systems allows us to handle client needs as they arise and proactively monitor their IT to ensure they have a safe and efficient environment to do business.

EMSCO has cloud backup, so they’ve been able to cut back significantly on individual PC storage. They also back up the core business application to the cloud. “integraSoft has a copy of our server and I know it gets backed up daily because I get an email when it goes to their other server,” says Foltz.

“We can handle some things, but once it gets beyond us, it goes to you guys. Our branch offices submit their service tickets to you directly. I don’t even get their ticket numbers anymore because I just know Scantron is going to handle it.”

In addition to doing the maintenance on EMSCO’s application servers, which are hosted by integraSoft in Chicago, Scantron supports 126 devices at six EMSCO locations across the Midwest, including Dell personal computers, HP and Xerox printers, and specialized OKI Data printers.

Since EMSCO does their own deliveries, they rely on an OKI Data three-part form printer, which STS maintains. “We leave one copy of the purchase order with the customer and bring one back to file,” Foltz explains. “We’ve looked at some scanners but they’re just too pricey. But we’ve had pretty good success with the OKI Data.”

EMSCO’s two in-house IT resources—Foltz and Office Manager Leslie Henthorn, both with 30-plus years of tenure — confidently delegate troubleshooting and support. “We can handle some things, but once it gets beyond us, it goes to you guys,” says Foltz. “Our branch offices submit their service tickets to you directly. I don’t even get their ticket numbers anymore because I just know Scantron is going to handle it.” When employees are working remotely, they can also call STS directly for after-hours support.

Foltz says that the semi-annual service reviews he has with STS have been a valuable part of the service, particularly when it comes to replacing the company’s PCs. “It’s a constant battle because we have so many of them, but we’re probably replacing 10 to 12 per year. Our Field Service Technician comes in and gets the list of people who need replacements and just does it for us.”

In the competitive marketplace of IT services, Foltz says he is approached weekly by other IT support vendors hoping to win EMSCO’s business. However, the quality of service from Scantron and the responsiveness of our Field Service Personnel (the word “deity” was used to describe them in our conversation) leaves him with no reason to consider changing anything.

We provide critical support — onsite and remote — to organizations that do not have in-house IT support or that need to supplement their existing IT support program. At more than 52,000 sites nationwide, customers use our solutions to keep their organizations running smoothly and productively.

Kim Larsen, Omaha-based VP of Managed IT Solutions at Scantron, was cited in the…