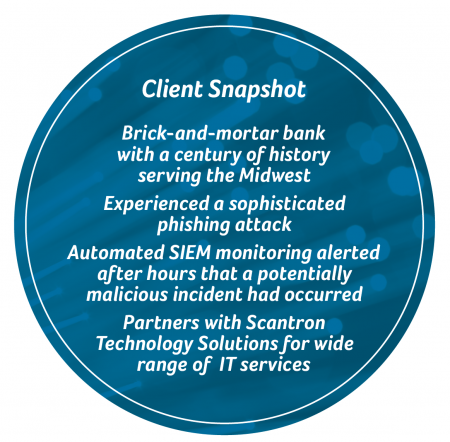 A Midwest bank with six locations throughout the heartland has served its community for more than a century. Recently, it worked with Scantron to harden its email and Microsoft® Office® 365 cybersecurity. Not long after, it was subject to a sophisticated phishing attack. The automated security hardening captured the attack and prevented a breach before it could occur.

Cyberattacks are on the rise, and hackers are getting more creative and sophisticated all the time. It takes a smart solution to outwit these bad actors.

Recently, a Midwest bank experienced a sophisticated phishing attack. The cybercriminals sent an extremely realistic message regarding an
invoice issue. Because the email replicated all the obvious items a savvy user would verify, the bank’s staff member acted on the email, thinking it was legitimate.

Fortunately, the bank had recently worked with Scantron to harden its Office 365 applications, including Outlook. In addition, they implemented a multi-factor network authentication approach that required the entry of a secure code sent via text.

After banking hours, the hackers attempted to log in using the credentials captured via the phishing email. The bank’s automated security information and event management (SIEM) monitoring logged the attempt, then alerted Scantron and the bank about the failed login. Since the attempt originated outside the U.S. and was off-pattern for this user’s login usage, multi-factor authentication was quickly able to thwart the attack before a security breach could occur.

“Scantron went over and above expectations,” says the bank’s operations officer. “They brought this solution to us and made us more secure.”

“Who knows how long it might have been before we caught the attack,” the operations officer continues. “It might not have been found until our next audit. Or worse, we might not have caught it until another partner alerted us. Scantron’s proactive approach gives us peace of mind.”

Thinking about what’s next in cybersecurity is a crucial part of Scantron’s solution. At Scantron’s suggestion, the bank implemented a further layer of email security hardening after the attack.

The solution includes monitoring reviewed by both the bank and Scantron. “Our SIEM reports check all the audit examiner boxes. The SIEM does all the work behind the scenes that I can’t see while I’m sitting at my desk—and it all happens automatically.”

Reports are stored for a year in an offsite location and are available on demand for analysis and decision making.

“Scantron is a partner we like working with. They do everything right for us and go
above and beyond to get the job done.”

In addition to the cybersecurity services, the bank works with Scantron to manage its business continuity and disaster recovery processes. This
includes managing the bank’s production servers as well as mirroring those servers to an offsite location.

“We had a server failure in the production environment during the past year,” notes the operations officer. “We were able to cut over to our
backup servers and continue operations at all our branches smoothly until we resolved the issue.”

When the bank’s local server hosting provider consolidated its hosting sites, Scantron worked with the bank to migrate its production environment to the consolidated location. Scantron then helped stand up a new backup environment with a different provider to ensure recovery and continuity in the event of a disaster.

The bank engaged Scantron for managed print services when it opened a new branch. Part of that effort included an efficiency audit to ensure printers were located conveniently.

“The efficiency audit of printer locations saved us from having to buy an extra printer that we really didn’t need,” the operation officer states.

“It’s just easier. Instead of tracking down all these different vendors, we can just call one. Scantron is a big company, but it has a local feel to it. They do everything right for us and go above and beyond to get the job done. They can do everything,” concludes the operations officer.

Scantron is proud to serve this esteemed Midwest institution’s managed IT, security, and print needs.

The affianceSUITE FI service package supplements the extensive IT support of affianceSUITE with recommended services specifically for financial institutions.