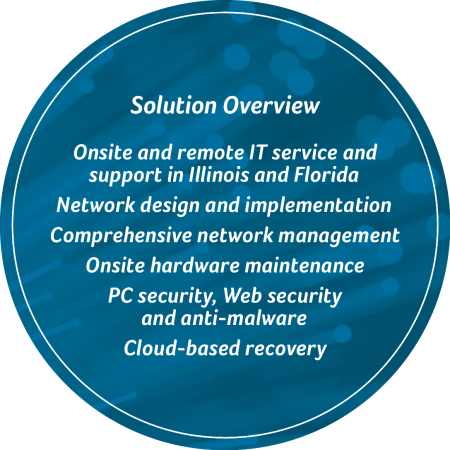 A specialty medical practice in Illinois was struggling with frequent computer downtime, despite having an IT service provider who seemed to be attentive and onsite quite often. After partnering with Scantron Technology Solutions, they enjoyed drastically improved availability and transformative IT strategy recommendations. They opened a second clinic in Florida and contracted with STS to support it as well.

Caring Medical originally used a small IT company that would visit their office almost daily to perform system updates and virus scans.

Despite the constant attention from the vendor, chief executive officer Marion Hauser and chief operating officer Mandi Jones were frustrated with systems that would freeze randomly and cause downtime with their laptops and desktops.

Outside of random downtime problems, they felt their instance of Microsoft Outlook was a constant headache and their email server was unreliable. Once the Caring Medical management team realized the true extent of support and IT expertise they were getting through their existing provider, they knew it was time to make a change and began to evaluate other companies who might be able to help them.

After being introduced to Scantron Technology Solutions as a preferred IT provider for their original health records management software, Marion and Mandi decided that moving forward with STS was the right decision for their immediate needs and future expansion goals.
Caring Medical’s leaders quickly realized that they had made the right decision to switch to STS because of key differentiators from their previous support model.

During the onboarding process, the local Regional Service Manager and STS engineer started to resolve their outstanding existing issues right away. By combining proactive network support with onsite hardware repair, many of the issues the practice had been plagued with for months began to fade away.

“There was no way we could open a satellite office in Florida without STS helping us to get it up and running.”

The STS Field Service Technician assigned to their Illinois location provides feedback on service tickets and how he will repair the device to prevent further problems. By using ServiceCOMMAND, Scantron’s online ticketing system, Marion and Mandi can also watch the progress of a service ticket through the system.

Scantron has been working with Caring Medical since 2012. During our service relationship, Caring Medical added a second location in Fort Myers, Florida. We helped Caring Medical by designing the network and, today, we support it as well.

In addition to providing day-to-day IT support and repair, STS also implemented and maintains their offsite disaster recovery and business continuity program. Our team also performs critical security monitoring tasks to protect their systems against viruses, malware, and malicious web content for both of their locations.

What could you achieve if you had an entire IT team supporting you? affianceSUITE…

Recently a healthcare practice was attacked with ransomware. Their IT service provider said he had…