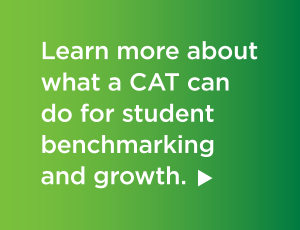 Performance Series K–2 Reading and Mathematics Foundations assessments are aligned to a set of skills, which were developed specifically for the Common Core State Standards (CCSS), and involved a review of standards documents from state and national organizations including: the National Assessment of Educational Progress (NAEP), the National Reading Panel (NRP), the National Council of Teachers of English (NCTE), the International Literacy Association (ILA; formerly the International Reading Association), and the National  Council of Teachers of Mathematics (NCTM). This review included unpacking the Common Core State Standards–identifying at a more granular level what students will know and be able to do when they have mastered the standard.

To address the rigor and depth of the Common Core and other 21st-century-skills, the K-2 assessments are developmentally-appropriate, challenging, and engaging; these assessments also introduce increasingly complex content and texts.

This capability allows districts the benefit of administering periodic assessments and utilizing their feedback, while leaving teachers free to focus on instruction, rather than test administration. 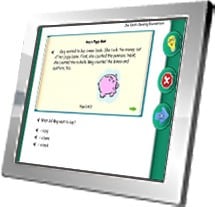 The Performance Series K-2 Reading Foundations assessment product was designed and created according to the rigor set forth in the Common Core State Standards.  Key points from these standards that are addressed by the reading assessment include: a focus on fewer concepts, the inclusion of reading informational and functional texts, an incorporation of sophisticated vocabulary and complex sentence structure, and the inclusion of texts representing a variety of contexts. Students in grades K–2 are presented with a variety of genres, including fables, folk tales, realistic fiction, functional texts (such as recipes and directions), and non-fiction science and social studies topics.

Students are asked to analyze texts closely and to find evidence to answer “who, what, where, when, and why” questions. In grade K, items range from simple concepts of print (such as constructing meaning from signs) to more complex tasks (such as identifying details, setting, characters, and problem/solution) from fictional texts read aloud and independently. By grade 2, students are asked to compare and contrast two versions of a folktale, analyze how a historical time influences context, and determine the connection between, or steps, in a procedure.

The progression of complexity in texts is drawn from Appendix A detailed in the Common Core English Language Arts Standards, which clearly explains the need for “increasing text complexity in successive years of schooling.”

Text complexity is determined by the qualitative and quantitative aspects of the text, as well as “variables specific to particular readers” and the “complexity of the task” associated with the text. Students in these early grades are exposed to complex texts read aloud, which mirrors classroom instruction and “lays the necessary foundation for students’ reading and understanding of increasingly complex texts on their own in subsequent grades” (Common Core State Standards, 2010).

Meeting the expectations of the Common Core State Standards for English Language Arts means that students are introduced to text with more rigorous quantitative measures beginning in the elementary grades. As described in Appendix A, page 9, “…many students just entering grade 2 will need some support as they read texts that are advanced for the grades 2–3 text complexity band.” The texts are more challenging, and the following progression of support is recommended:

In addition to the Common Core standards, the National Reading Panel recommendations also influenced the development of the K-2 Reading Foundations assessment. Learning Point Associates notes in its article “A Closer Look at the Five Essential Components of Effective Reading Instruction: A Review of Scientifically Based Reading Research for Teachers,” that after conducting “decades of research,” the NRP recommends that reading instruction include five components of reading:  phonemic awareness, phonics, vocabulary, comprehension, and fluency (2004). All but fluency (which cannot be appropriately assessed in a computer-adaptive environment) are included in the K-2 reading assessments.

In grades K-2, a number of the Common Core English Language Arts standards specify that skills and understanding are developed “with prompting and support” and “exposure to a range of texts and tasks” (Common Core State Standards, 2010).

Examples of standards from these grades that specify “with prompting and support” include the following standards:

The addition of audio support in grades K–1 is an important feature of the Scantron Performance Series K-2 Reading Foundations, given that “K–1 texts are not amenable to quantitative measure,” (Appendix A, page 10); however, qualitative factors are important considerations. Scantron’s assessment developers followed these guidelines as texts were analyzed and selected for inclusion. As a result, the assessment includes a variety of passages within a range of complexity for each grade level. These passages include appropriate support for readers, allowing students access to the content and providing an opportunity to assess students’ application of skills needed to understand complex text.

Audio support is gradually reduced when moving from Kindergarten to Grade 2, based on passage readability, vocabulary, and the complexity of the content. Passages that address independent reading skills do not include audio support in grades K and 1.  Additionally, for skills which require students to “read independently,” audio is not made available. Furthermore, all passages in grade 2 are read independently. Passages included in the Scantron Performance Series K-2 Reading Foundations are evaluated for readability (using the SPACHE, Powers-Sumner Kearl, Fry, and Flesch Grade Level reading programs), complexity, and age appropriateness. 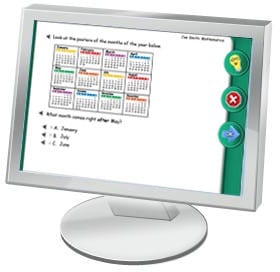 The Common Core states that its standards “provide students with a solid foundation in whole numbers, addition, subtraction, multiplication, division, fractions and decimals—which help young students build the foundation to successfully apply more demanding math concepts and procedures, and move into applications” (Common Core State Standards, 2010).  Specifically in grades K, 1 and 2, the Common Core emphasizes the understanding of the number core (how a number corresponds to a quantity and how numbers can be taken apart and put together) and Mathematics Foundations assesses this concept.  Additionally, not only does Mathematics Foundations assess the procedural understanding of skills, but it also assesses conceptual mastery of skills and content.

In grades K-2 the Common Core standards group math standards according to domain. All domains are addressed in the Mathematics Foundations product.  These domains include: Counting and Cardinality, Operations and Algebraic Thinking, Number and Operations, Measurement and Data, and Geometry.

Because of the student age/ grade, Scantron intentionally designed meaningful graphical and audio support around this product.  Limited words are used in the math items, especially in grades K and 1.  Text is limited only to what is actually necessary for the question to be understood by the student. This ensures the focus of the assessment is on mathematical understanding rather than reading proficiency. The product substitutes the need for text with strong graphical support within its questions. To reinforce vocabulary in the context of math (when appropriate) words and images are presented together.

Scantron’s content development team is made up of individuals who have strong backgrounds in education. All Performance Series Reading and Mathematics Foundations content development has followed Scantron’s rigorous item review process.  This process is led by English language arts/reading and mathematics subject matter experts with additional reviewers comprising of certified classroom teachers and professors across the country.

Scantron is pleased to offer this technologically-advanced product and its developmentally-appropriate, challenging, and engaging content. The Scantron Performance Series K-2 Reading and Mathematics Foundations Assessments enable districts to feel confident that they are armed with the tools necessary to track and improve achievement in each and every student they serve with the academic rigor needed to be prepared for the transition to Common Core State Standards.

[1]     A key difference between K-2 Math and K-2 Reading is that rather than being a separate test, the K-2 math items are part of the complete mathematics test (grades K–9). Please see Reading Foundations to Reading Linking Study and Recommendations on our website for details on the differences between the Reading Foundations and Reading tests.