As we celebrate Juneteenth 2021, Scantron recognizes the contributions of Black Americans to our nation. 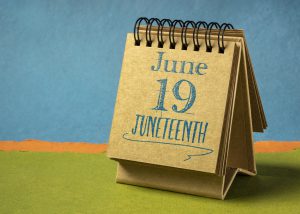 Juneteenth, also known as Emancipation Day, Juneteenth Independence Day, and Black Independence Day, commemorates June 19, 1865, the day when slaves in Galveston, Texas were first informed that they were freed. It is the oldest continuous U.S. celebration of the end of slavery.

Although Abraham Lincoln’s Emancipation Proclamation took effect on January 1, 1863, it was not until almost two and a half years later that slaves in Texas were informed of their freedom. This news came to them via Major General Gordon Granger, who formally announced the end of the Civil War and the end of slavery on June 19, 1865.

Slave owners in Texas and elsewhere continued to hold their slaves captive after the Emancipation Proclamation. Even after the Confederate surrender at Appomattox, there was still slavery in Kentucky, New Jersey, and Delaware. As historian C.R. Gibbs notes, “We needed the 13th Amendment to shut down slavery.” Congress passed the 13th Amendment on January 31, 1865 and it was ratified on December 6, 1865.

Although the Emancipation Proclamation and the passing of the 13th Amendment are significant legal milestones for freedom, the reality is that freedom came to enslaved black people at different times. For this reason, Emancipation celebrations are often called by different names and take place on different dates. Washington D.C., for example, celebrates Emancipation Day on April 16th because it was on that day in 1862 that more than 3,000 enslaved black people in D.C. were freed. For the Galveston, Texas slave community, June 19th became their Emancipation Day, since it was on that day in 1865 that they learned of their freedom.

Black Texans celebrated the first anniversary of the announcement of their freedom the following year, and continue to do so annually, with community events such as parades, cookouts, prayer gatherings, historical and cultural readings, and musical performances. As Black Texans emigrated from Texas to other areas of the United States, they carried the Juneteenth celebrations with them. In this way, Juneteenth became a symbolic date representing not just the Galveston slaves’ freedom from slavery, but ALL Black people’s freedom from slavery in the United States.

Although Juneteenth is well known among Black and Texas communities, it has gained wider attention following the May 2020 murder of George Floyd. The ensuing national and international conversations around the injustices and violence perpetrated against people of color generated more awareness of this holiday. Additionally, a recent film about the Tulsa Race Massacre in 1921 is bringing broader national and international attention to both Juneteenth and to the Tulsa Race Massacre, reminding us of the long history of systemic violence against Black Americans.

Juneteenth is not only a commemoration of the freedom of Black people; it also represents the ways in which freedom for black people has been delayed. It is, as Houston native Bobby Berk notes, “the day when all Americans were liberated and created equal. It should be a day to reflect, to learn, and to grow as a nation and as a people.”

To this end, there is a growing movement to make Juneteenth a national holiday. The first step toward this push has begun on the state level. On January 1, 1980, Juneteenth officially became a Texas state holiday; since then, 46 other states and the District of Columbia have also commemorated or recognized the day.

This year, Juneteenth occurs on Saturday, June 19, 2021. If you are new to this holiday, one way to honor it is to see whether your local community is holding Juneteenth events. Google “Juneteenth 2021” and your zip code to easily find local events to your area. If you would like to sign the petition to make Juneteenth a national holiday, you can do so at Change.org.

This blog post brought to you by the Scantron Women’s Network and BELONG, our Diversity & Inclusion committee. BELONG and the Women’s Network are aligned in creating awareness of and promoting equity and inclusion.

BELONG is a company-wide focus on inclusion of each of our many views, perspectives, experiences, and the value of the uniqueness of each of us.

The Women’s Network is a corporate-wide group of women and men coming together to foster women’s professional development, connectivity and outreach.

Scantron values the uniqueness of each of us and how that collectively affects and enhances our everyday workplace and our comprehensive strategy for sustainability and growth of the business. The full potential of our effort can only be realized when all of us feel included, that we belong, and that we are respected for who we are and what we offer. The feeling of belonging has the strongest relationship to engagement.

Celebrate the Women in Your Life Welcome to Women’s History Month, kicked off by…